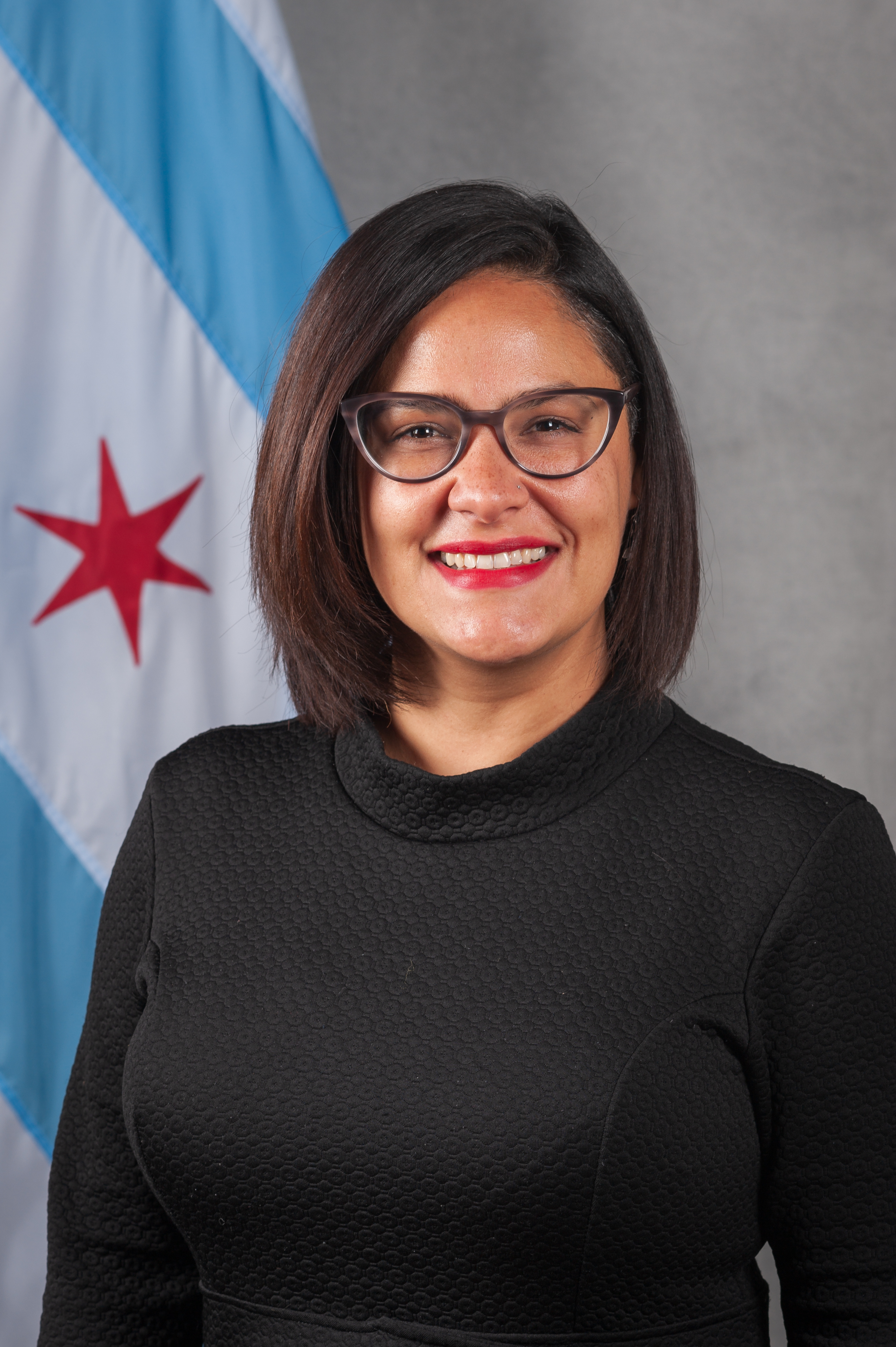 Rossana Rodriguez is serving her first term as alderman of Chicago's 33rd Ward. Rossana is a mother and resident of the Albany Park neighborhood. Prior to becoming alderman, Rossana worked as a youth educator and was involved in community groups as an activist and organizer.

Her interests as alderman include protecting neighborhood affordability, supporting our ward's immigrant population, young people, and diverse communities, and creating more democratic processes so that ward residents are involved in the decisions that impact their lives.

Originally from Puerto Rico, Rossana has been a lifelong advocate for public education, labor rights, and the wellbeing of youth and families. Her career as an educator includes eight years as a director and mentor in a nationally acclaimed youth theater company in Albany Park, where she guided high school students to fulfill their artistic and academic potential.

Rossana is the first Latinx alderman to represent the 33rd Ward. She serves as chair of the immigration committee on the City Council's Latino Caucus and is a member of the Progressive Caucus.

She serves on the City Council's committees on Education and Child Development, Environmental Protection and Energy, Ethics and Government Oversight, Health and Human Relations, Pedestrian and Traffic Safety, and Committees and Rules.

Chris Poulos, chief of staff, holds an M.A. in urban planning from University of Illinois-Chicago with expertise in housing, TIFs and the privatization of city assets. He has spent the last decade working with community organizations in Chicago.

Veronica Tirado-Mercado, director of neighborhood services and community organizing, is a public health educator who has worked in harm reduction programs for drug users, mental health services and restorative justice initiatives in Chicago and in Puerto Rico.

Lilia Escobar, deputy director of neighborhood services, previously worked as a project coordinator and paralegal at the National Immigrant Justice Center serving LGBT immigrants and immigrants in detention centers. Raised in Albany Park and Lincoln Square, she is a graduate of Amundsen High School and completed her Bachelor's degree at St. Olaf College in Minnesota.

Anthony Tamez-Pochel, neighborhood and business services coordinator, is co-president of the Chi-Nations Youth Council, which advocates for Native youth in Chicago. He is a graduate of Von Steuben High School. Anthony’s background as a Cree and Lakota has influenced his efforts to serve his community in Chicago. Through land-based education, Anthony works to ensure that the community does not lose its connection to the land and helps community members plant medicine gardens in their own backyards to maintain that connection. Anthony has been involved with Center for Native American Youth (CNAY) in 2015, as a Youth Ambassador for President Obama’s Generation Indigenous (Gen-I) initiative. In 2018, he was recognized by CNAY as a Champion for Change for his initiative that confronted the misconceptions about Native peoples in Chicago and around the country. Anthony currently services on CNAY’s Youth Advisory Board as well on United National Intertribal Youth’s (UNITY) executive committee.

Alejandro Monzón, 33rd Ward superintendent, is a community organizer with extensive knowledge of housing issues and regulations in the ward. He previously worked as a tenant advocate at the Illinois Tenants Union and an organizer at Latino Union.